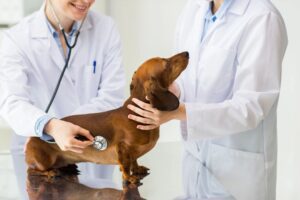 Years in the making

The process in which larger practices buy smaller ones is not new. For decades, independent practices have joined to pool resources and maximize efficiency. In recent years, however, larger corporations joined the game. Just over a decade ago, Mars Petcare, a subsidiary of the food giant Mars, Inc., bought Banfield Pet Hospital, which had more than 900 branches in the United States. In 2015, they acquired BluePearl — the largest companion animal specialty and emergency care chain in the country with 53 locations. They then purchased Pet Partners in 2016, a group of 60 general practices.  In early 2017, they announced their purchase of VCA Animal Hospitals, Mars Petcare’s reach dominates over any other veterinary conglomerate, with National Veterinary Associates coming in at a distant second with 422 branches.

Of the total veterinary medical firms in the United States, corporations own only 3,000 of the total 26,000.

At first, people in our area who sell to corporate receive a lot of money, and for the first however many years, they have contracts with the doctors to stay on to make the transition smoother,” she says, “but when that contract is gone, they keep the original associate as the medical director and keep hiring new associates, and what we’re finding is that clients aren’t happy with those sorts of changes.” Perez-Bruno says that this “revolving door” of associates coming in and out is part of the problem with corporate consolidation.

Lauren Griggs, D.V.M. ’16, worked at a Banfield clinic in Arizona for over a year immediately after graduating, and attributes the signing bonus of $15,000, fully-funded moving expenses and benefits package as a key part of the appeal that initially drew her to take a position with the company. But, for Griggs, these perks could not make up for the eventual burn-out she experienced at her high-volume branch. “I loved the benefits. They were really good,” she says. “But they weren’t worth my sanity.”

Griggs’ comment touches on a key complaint around corporate clinics — the focus on the bottom-line.

“At Banfield, they do emphasize getting as many pets in as possible,” Griggs recalls of her branch. “They have had a reputation of pressuring vets and practice managers to sell more plans and products.”

Mitchell Kornet ’76, D.V.M. ’79, owner of Mid Island Animal Hospital in Hicksville, New York, says many of his colleagues see an apparent difference in the goals of some corporate practices and private practices. “Corporate practices have to answer to stockholders and the bottom line, while many private practices focus on long-term relationships with patients and clients,” says Kornet. “Every practice has to make a profit to be sustainable, but a concern is that some corporations are not as interested in the bonds that their veterinarians make.”

If young veterinarians want to enhance their earning potential, they’ll need to own their own practice, says Mitchell Kornet '76, D.V.M. '79.

However, many maintain that business ownership is the best path to financial success in the veterinary field. Kornet is concerned how the consolidation trend might remove this path for many veterinarians.

“This is really impactful for alumni looking to buy a practice,” he says. “Thirty years ago, the model was that, as a veterinarian, you’d buy into your own practice, or start your own practice — but now there’s the competition with a larger corporation buying that practice instead. I think that’s bad for future entrepreneurs because they don’t have the same opportunities.” If young veterinarians want to enhance their earning potential, says Kornet, they’ll need to own their own practice.

"Corporate practices have to answer to stockholders and the bottom line, while many private practices focus on long-term relationships with patients and clients."

Griggs had a different experience at her Banfield clinic, where she found herself, just a year out of veterinary school, struggling as the only veterinarian on staff. “I was working by myself and not continuing to grow,” says Griggs. “I had to turn so many patients away because I didn’t have the experience to treat some of the more complicated cases … Ultimately, the medical care was the last straw for me — I felt like the quality was really lacking.”

While caseload may be high, corporate practices do provide a standardized customer experience, with a set of guidelines on how each branch delivers its services. While this standardization may appeal to some clients, it could wear on a clinician, says Kornet. “Some corporations have formulas that dictate how you’re to treat an animal, and that leaves out a lot of the creativity a veterinarian might have,” he says. “In private practice, I get to have a lot of fun thinking about each patient and using my creativity.”

Perez-Bruno agrees. “[Corporations] have an algorithm they have to follow,” she says, “and each doctor has to practice the same way.” By contrast, in Perez-Bruno’s practice, she employs four veterinarians, each of whom practices medicine differently. She says there is no need to dictate to them a specific way of practicing if their methods differ or if they come from a different school.

“As long as my patients are happy and that you’re doing good medicine, we allow you to practice any way you feel comfortable,” she says. "We also have the flexibility to practice according to the owner's financial situation, since we are more flexible than corporate in how much we want to charge to help a patient for treatment."

Newer generations of veterinarians are clear about the work-life balance they expect in their field.

“We have patients who have been coming here for generations. People come in here and say they remember when they were a kid. It’s being kept by the same person for over 30 years, people know you in the community and you’re part of the community.”

Perez-Bruno remarks on the trade-off: “One thing with corporate is you can leave everything behind you at the end of the day, but then you’re an employee only,” she says, which isn’t the case with her practice. “It’s more of a family culture here,” she says of West Orange Animal Hospital.

Just because there are these benefits [to corporate consolidation],” she says, “it doesn’t necessarily equate to a better work experience, better team experience or better client experience."

From the moment I walked through the door, I could see a huge difference, not only in quality of medicine that was being provided, but also the compassion the providers had

practice ownership is a smart path for many young veterinarians. “What I did myself thirty years ago is still possible,” says Kornet. Indeed, money is even more accessible today than decades ago. “Banks are more willing to lend than they were before. They realize that veterinary practices are often profitable business entities.”

“If I was a graduating today, I would still go out on my own,” Powell says. “I would look very hard at the right location, right building and the right business to purchase. If you look at those factors carefully, practice ownership is still a very valid thing to do.”

For Harris at Banfield, choosing between owning a practice and going corporate is a very personal choice.

There are banks that specialize in veterinary hospitals, says Perez-Bruno, and there are even veterinary accountants. “There are people out there who are willing to help you if that is your dream.” And, while the financial options may be more constrained due to the consolidation trend, says Kornet, that doesn’t mean that buying or starting a practice can’t be done.

Posted in Uncategorized
Scroll To Top